A local junior team has joined forces with a Kingswinford indoor football centre to develop the next generation of footballing talent.

Gornal Colts and Gornal Girls has taken the ambitious decision to create a new academy in partnership with ‘Sixes’ in Ham Lane as part of its 10th birthday celebrations.

The club, which currently operates ten teams made up of over 100 players, will provide a number of special courses and training sessions to get children as young as 3-years old involved in the game.

These will be staffed by experienced FA coaches and utilises Sixes’ two indoor pitches and changing facilities. 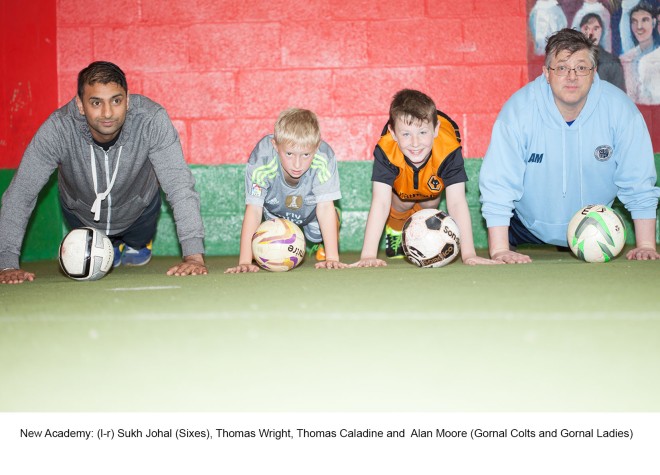 “This is a really exciting development for our club and provides us with a constant stream of young players, who are well coached and understand the game,” explained Alan Moore, Chairman of Gornal Colts and Gornal Girls.

“Sixes is often the first experience some children get of football so we thought we’d build on our existing relationship with them and formalise a clear progression route into our teams and hopefully into semi-professional or professional clubs.”

He went on to add: “We’ve seen a gradual decline in the number of players wanting to get involved in organised teams, especially on the girls side. Hopefully, this move will be rectify this and enable us to build our club up so we can compete at every age group from under 7s upwards.”

Sukh Johal, Director of Sixes Football Centre, added his support: “We have been involved with Gornal Colts and Gornal Girls for many years so we see this move as a natural progression.

“It also raises our profile in grassroots football, which can only be good for our business. If we can also give a little back by helping develop the next England internationals then all the better!”

Gornal Colts and Gornal Girls were formed in 2005 after breaking away from Gornal Athletic’s youth structure.

It plans to mark its 10th anniversary by exploring new commercial partnerships with local businesses and building relationships with schools and colleges.

Longer term, the club is looking at the possibility of developing its own dedicated sporting facility in Gornal, including full size pitches and ‘3G’ training surfaces. 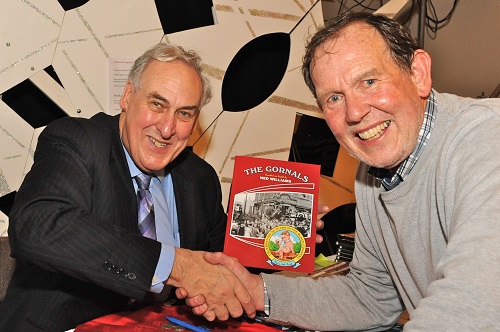 Ned Williams and photographer Graham Beckley celebrate the publication of The Gornals.

The speaker is Ned Williams the well-respected Black Country historian and author.

Ned explores the Gornals (the subject of his fiftieth book) and shares his warm affection for the villagers and their traditions. This illustrated presentation reflects a flavour of Black Country life still around, but fast disappearing.

For past and present Gornal folk, it is an evening not to be missed.

As usual, visitors are invited to come along – admission £1. Annual membership of the Society costs £5 and gives free access to the programme of talks.

Schoolteachers, Andrew Barnett and Trevor Genge, were co-founders of the Society in 1984. Andrew launched the Sedgley Local History Museum (closed 2004) and Trevor published five books on the Sedgley Manor villages. Both were avid researchers and staunch supporters of conservation projects.

Dudley Zoo trainee keeper, Hannah Follows, discovered she is continuing a family tradition when her great grandmother handed her an old photo.

The black and white image reveals 93-year-old Emily Evans, who lives in Gornal, at the Castle Hill site on the day the zoo opened to the public in May 1937.

Emily, then 18, was employed as a cook in the Queen Mary Restaurant and the photograph shows her and two colleagues taking a rest outside the iconic Tecton building.
Sixteen-year-old Hannah said: “My great gran was so proud when
I started at the zoo – I’m the site’s youngest apprentice – and she couldn’t wait to show me the photograph of her at work on the day the zoo opened.
“She’s still very interested in everything that goes on at the zoo and she’ll be coming along to our 75th anniversary celebrations in May to have a good look around, particularly in the Queen Mary Restaurant.”
Do you have any memories of Dudley Zoo you’d like to share? Send your pics and stories to us and we’ll feature them on the site!
Visit Dudley Zoo’s website for more information.

It was the epicentre of the famous Dudley earthquake in 2002 and now Gornal may be able to lay claim to yet another global phenomenon – as the launchpad for social media in the Black Country.

At a  recent workshop held for manufacturers in the Black Country, it was revealed that six of the 12 delegates in attendance were either born in the village or are currently living there.

The seminars, hosted by Danks Cockburn Public Relations – a company founded by former Ellowes Hall pupils Mat Danks and Russ Cockburn – was giving local companies an insight into the world of Twitter, Facebook, LinkedIn and Google+ in a bid to help them win new contracts and create jobs.

During the presentation, funded by MAS Auto, the word ‘Gornal’ cropped up in conversation and it soon became clear that nearly half of the audience had some association with the area.

Trico Tooling’s Mark Poutney and Adam Calloway of Benton Manufacturing were both born in the village, while Jonathan Hickman (Cab Auto) listed Straits Primary as his first school and Andy Essom (HT Brigham) has swapped plush Sutton Coldfield for the friendly enclave of the Black Country.

Russ Cockburn, director at DCPR, says: “We’ve always said Gornal is at the cutting edge of technology and this surely proves it beyond any reasonable doubt.

“This was a social media workshop open to every manufacturer in the West Midlands and we ended up with six ‘Gornolians’ as delegates. While we tried to keep on topic as much as possible, it wasn’t long before we started sharing tales of pubs we frequent and our universal love of real ale – well, that’s two topics we’re certainly cutting-edge in!”

Visit the DCPR website to learn more about how this local company is engaging others in the business opportunities presented by social media.

Since November 1950, fans of this renowned local football team have enjoyed action-filled matches, played not for money, but out of love for ‘the beautiful game’.

It’s a feeling of excitement and a sense of passion many fans find lacking in top league matches. And, for Gornal Athletic Football Club’s new chairman Mat Danks, it’s the reason he returned to the team’s Garden Walk ground after an absence of several years.

“When I was a reporter for the Dudley News, I’d regularly attend matches to report on Gornal AFC,” he explains, “but, after leaving the newspaper to run my PR company, I tended to go and see bigger teams such as West Brom instead.

“However,” he continues, “I eventually fell out of love with top league football. Because of all the money involved, going to see a match has become a bit like going to the cinema – people’s expectations are much higher and they demand to be entertained.”

So, disillusioned with big name matches, Mat decided to go and take another look at his local team, Gornal AFC. And, it was a decision that led to some surprising developments.

“I began getting involved with the club and, before I knew it, was asked if I’d like to become chairman,” he explains. “They’d already got a great set of people and a fantastic manager, former Gornal striker Ian Rowe. I think they just needed someone with a business brain to build on this already excellent team.”

It’s a partnership that certainly seems to be paying off – this Saturday sees Gornal play Shifnal Town FC in the FA Cup preliminary round.

“We’ve got exceptional players and a strong squad,” says Mat. “Only one team goes up and we want to be that team.”

Saturday’s match promises to be a thrilling one but, according to Mat, fans can always expect plenty of action at any Gornal game.

He says: “You’re watching blokes who play for the love of the game. Although local, non-league clubs don’t enjoy the financial rewards of bigger teams, that doesn’t mean the excitement on the pitch is any less. In fact, very rarely will you see as much action as during one of our matches.”

Mat’s enthusiasm is infectious – something borne out by the way Gornal AFC is now attracting more and more fans through the club’s active use of social networking site Twitter.

“Social media is really helping us build bridges with teams all over the country,” he explains. “Using Twitter, we’ve developed links with Glaswegian Saturday morning side Tally Vic, for example. It’s opening doors and helping us connect with many new fans.”

And among Gornal’s ever-growing legion of supporters are the lads from Sedgley indie rock band, The Lines, who can also count Mat as one of their biggest fans.

He says: “I’ve seen them play about 50 times, all over the UK and abroad. They’re a superb band, a top bunch of lads and it’s great to know they support our team.”

Join the ranks of Gornal AFC’s many supporters for the all-important FA Cup match this Saturday, August 20. Kick-off is at 3pm.

An established local under-14s football team is calling for youngsters across the Black Country to put their best feet forward and join the squad for the new season.

Having won both league and cup trophies last season, Gornal Girls FC wants to build on this success when the season begins in September.

“However, to achieve this, we need enthusiastic local team members who are free to attend training once a week,” says under-14s team organiser, Craig Whittingham.

“We find that, while Gornal Boys FC has no trouble getting new recruits, the girls are often not so keen to come forward. That’s why we’re calling out for local lasses who love football to get involved and join a great team.”

Players are coached by an FA-qualified and CRB-checked coach with a valid first-aid qualification.

Training sessions at this charter standard club usually take place on Thursdays from 6pm, with matches played on Saturday mornings at Pensnett School.

Players, once signed, receive a full strip in addition to other training wear. To qualify, members will need to be in years eight or nine from this September.

Contact Craig on 0785719219 or visit the club’s websitefor more information.